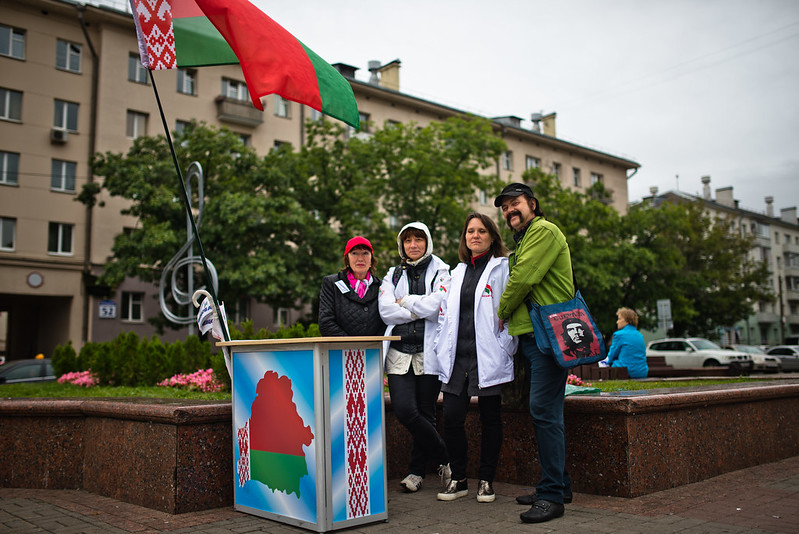 A campaign stand of Belaya Rus‘ members in front of Minsk concert hall.

Since 1 August 2016, candidates running for the parliamentary election have been out campaigning. Out of the 488 current applicants who are fighting to win a seat in the House of Representatives – the lower house of the parliament of Belarus – nearly two thirds were nominated by a party, while the rest claims to be „non-partisan“.

These figures might give the wrong picture, however: While after the 1996 parliamentary election 49 out of 110 deputies belonged to a party, after the parliamentary elections in 2012 the number was down to only 5, all pro-governmental (three of them representing the Communist Party of Belarus, one the Republican Party of Labour and Justice and the other the Belarusian Agrarian Party). The majority of the other „independent“ deputies have been working for state agencies or regional administration, meaning that they originate directly from the state machinery, which is dominated by the president.

Behind the President’s rant lay a greater power struggle with the previous parliament, known as the Supreme Soviet. In Autumn 1996, this quarrel was settled by a positive referendum on constitutional amendments, initiated by Lukashenko himself. The constitutional change reduced the size of the Supreme Soviet and gave the president the authority to dissolve the assembly at will and provided him rule by decree. He replaced the previous parliament with a bicameral system. This change quickly diminished the role of the briefly extant Belarusian legislative body. Since then, the constitution has strictly limited parliament’s control of the executive; its members can barely influence the appointment and dismissal of the government and ministers. In short: The „parliament has been emasculated“ and is simply „basically rubber stamping laws“.

By limiting potential opposition, the President tries to avoid the emergence of parallel power structures. Thus, parties and political organisations have been forced to go underground, thereby ending their contact with ordinary people and leading to their marginalisation. „Unlike other countries, Belarusian parties do not provide social opportunities, personal status or business contacts. In addition, the majority of Belarusians do not believe that party membership will have an effect on whether or not a party will achieve its goals“, writes political scientist Tatsiana Kulakevich.

As a result, political parties nowadays are more political clubs with mostly only several dozen active members. Even the three pro-governmental parties of the present parliament „mostly stay unnoticed by the general public“, sums up political analyst Yauheni Preiherman. A notable exception is Belaya Rus‘ ‚White Rus‘: This Belarusian public association was founded in November 2007 to support Lukashenko, based on the idea of the Russian party Yedinaya Rossiya ‚United Russia‘. In contrast to its Russian counterpart, Belaya Rus‘ has not yet been transformed into a „party of power“, despite nearly half of the current deputies being members. Paradoxically, then, the longer and more present Belaya Rus‘ becomes, the more likely we are to see a presidential U-turn.